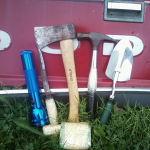 Hi, welcome to Deadliest Warrior Wiki! Thanks for your edit to the User:Alockwood1 page.

There's a lot of stuff. For paragraphs, simply hit enter twice. To sign something on a talk page, use four tildes (~~~~). Help:Editing is a useful resource for everything else. -LeoLab 17:10, September 5, 2011 (UTC)

Taken care of. For future reference, there is a box for categories at the bottom of each page. Click "add category" and type in the category you want to add. -LeoLab 14:34, September 7, 2011 (UTC)

It's still not an improvised weapon, it and other combat knifes still issued with the idea the user may use it as a weapon, that's why there is knife combat training in the military. It's not improvised, it just a weapon. User:Swg66-Cambria ne'er can yield! 23:33, September 14, 2011 (UTC)

For 1, I don't consider Wikipedia a valid argument unless the statments are sourced. 2) Even though it is used more for none military purposes doesn't mean it's not a weapon. You are more likley to need it for day to day uses, you are more likly to have to open a can than kill a man, even the KA-BAR is as a utility knife. But it just supports the statment it's meant to be used for multiple purposes. User:Swg66-Cambria ne'er can yield! 00:05, September 15, 2011 (UTC)

Okay, well it's "Cambria" not "Can", and it's not my user name it a signature, but I do consider other possabilitys, but in this case I'm taking a firm stance becasue it's not improvised, it's stilled issued to soldier in Nepal, the Gurkha Contingent of the Singapore Police Force carrys the Kukri, and I doubt they are planning on doing yard work.

Take your example of the ax, the ax that is used today for yard work would indeed be an improvised weapon, but a battle ax would not, there designed differently, like a kitchen knife to a combat knife, the Kukri is like Seax or KA-BAR, a utility knife that while often used for a tool, is not considered an improvised weapon becauase it's still expected to preform military function as well as ultility functions.User:Swg66-Cambria ne'er can yield! 00:42, September 15, 2011 (UTC)

Currrently I'm working on a story based on Deadliest Warrior. Basically, all of the real warriors (in five man groups, with Named Warriors leading the appropriate underlings) (310 warriors at least) will have to protect a village from a vast horde of over 100,000 zombies. It will be interesting. Heck, I might post it up on Deadliest Fiction. Alockwood1 00:35, September 27, 2011 (UTC)

im not banned on DW wiki its on DF for getting in a fight with another user we both got banned then he threw a fit and said he s quiting DF why do you get involved? not that im mad or anything just curiosTomahawk23 17:31, November 6, 2011 (UTC)

and the bann ends today

congrats on being made rollback.

we are actuly getting some new content add over there.

Just so you know I deletad the "Glean Zone Siphonizer ("Huggle")" page for you.

I also deleated the other pages that were marked for deletion.

Wanted to give you a heads up. Edit

Hay Alockwood1, my family and me are going to be summering in another state and it might be a while before I can edit on this wiki again, we leave tomarrow morning. Just wanted to let you know I may not beable to keep watch on this wiki for a bit.Wolf 91 (talk) 18:46, June 29, 2016 (UTC)

Thank you for informing me about this Alockwood1. This troll is now blocked for a full year. Let me know if you ever find any other trolls. Pikazilla (talk) 12:39, November 5, 2019 (UTC)

Retrieved from "https://deadliestwarrior.fandom.com/wiki/User_talk:Alockwood1?oldid=47310"
Community content is available under CC-BY-SA unless otherwise noted.