The Rajputs, from prehistory to today, have almost always been vital warriors of India. War culture has been a part of India’s history throughout every century. The goddess Parvati is depicted using a Sword (Khadga), Trident (Trishula), Thunderdisc (Chakra), Arrow (Tir), Javelin (Bharji), Club (Khitaka), Bow (Dhanush), Noose (Pasha), Goad (Ankush), Shield (Sipar) and Axe (Parashu): and she uses them all AT THE SAME TIME: that’s more deadly arms than General Grevious using Doctor Octopus’ tentacles. Considering that India is protected by the Indian Ocean, Burmese Jungle and Himalayan Mountains; the only safe way to enter India would be by the north west: home of the Rajputs. Macedonian, Arab, Persian, Turkish, Afghan, Mongol and Mughal (the latter two are technically different) Empires all attempted to invade India: and the Rajputs were the first to engage in each invasion. Rajput kingdoms could not afford to have basic soldiers, and India itself wasn’t always united nor willing to assist: the Rajputs were forced to perfect warfare just to survive.

The Medieval Rajput is conceptually similar to Knights; although instead of serving the monarchs, the Rajputs WERE the monarchs. These Rajput kings and princes could afford the best tools for combat, including war elephants: yay!

Now India as a whole is known for having tropical and warm temperature. While Rajasthan is more arid, it still has extreme temperatures: although some regions have cold winters as well as hot summers. This means while full plate would be too hot to use, the Rajputs are still heavily clothed: in what I’m assuming is a very stylish kaftan, which is well ventilated to cool the warrior down. This isn’t only for show, as the Rajputs wear chainmail woven within the garment, which also has plate armor for certain specific areas like the gauntlets, center of chest and kneecaps. I have noticed that some Rajputs have a chainmail veil as well: I don’t know how effective this would be in protecting the face, but I suppose it would work.

There is almost no weapon these guys DON’T have. Spears, axes, swords, maces, bows, shields, and daggers are the basics for most armies. But India also has; Aara Whips, Chakrams, Trishula Trident, Katar Punch-Dagger, Pata Gauntlet-Sword or ‘Punch-Sword’, Bagh Nakh Claws, and many many more.

The variety of swords is just astonishing; you got swords that are heavy, light, long, short, stabby, slashy, daggers or two handed. The Dhal shield, which is a good sized and strong shield that can combo well with most of these weapons anyways, can also have a spike akin to the Targe.

I will quickly mention 3 weapons that are so unique that they show just how exotic the Rajput were.

The Katar (I’m not calling it a Katara because it will confuse Avatar fans): This is a great sidearm; it is surprisingly agile, brutal and powerful despite the small size. Its armor penetration is due to the fact that it is used by punching the opponent, allowing the full force of your arm to be parallel and directly behind the weapon: unlike an axe that uses a handle that is perpendicular to the arm. It is very aggressive, even when compared to other daggers.

The Aara and Urumi are Whip-Swords: A concept I originally didn’t think was possible. At first it appears to work: whips are long, unpredictable, can be used in a 360 degree rotation, and these blades are sharp enough to slice through flesh. I would assume that they could also tangle and wrap around the enemy’s limbs and weapons as well. However since whips are lightweight, the blade doesn’t have the weight necessary to do damage against basic armor. Furthermore, the wide swinging movement of the whip makes precision strikes extremely difficult. Most helmets, including those that don’t block the face, still offer flaps of plate or mail at the sides of their face to prevent such side-strikes. Basic mail armor is strong enough to tank slashes from even the legendary Katana: so a light and flimsy whip would do virtually no damage. Most importantly; the wide movements of the whipping is so dangerous to the user and so exhausting to perform that just attempting to use the weapon is risky. This is a great example of a weapon that is flashy and skillful yet inflexible: regular swords are just more practical.

Chakrams: a portable and flexible projectile. Ranging from small Shurikens or massive Wind and Fire Wheels; these disks are designed to be throw at a relatively rapid pace. Rajputs did have bows, but if facing multiple approaching enemies at mid-range, they can throw these multiple disks to harm or kill before a close-quarters engagement.

These disks are so lightweight that they can be used as jewelry. I mentioned that Ninjas used Shurikens because the weapon was so light that they could carry literally dozens of them without being slowed down. The Rajput meanwhile is a conventional soldier, not a lightweight sneaky assassin (India already had something like that anyways: the Thuggees). Since they were so lightweight, it made sense to wear them into battle if you were a Rajput that was already heavily armed. Some Chakrams could also be worn on the arms to block sword slashes (for any One Piece fans: this is similar to Mr. 1’s attack: Spiral Hollow). 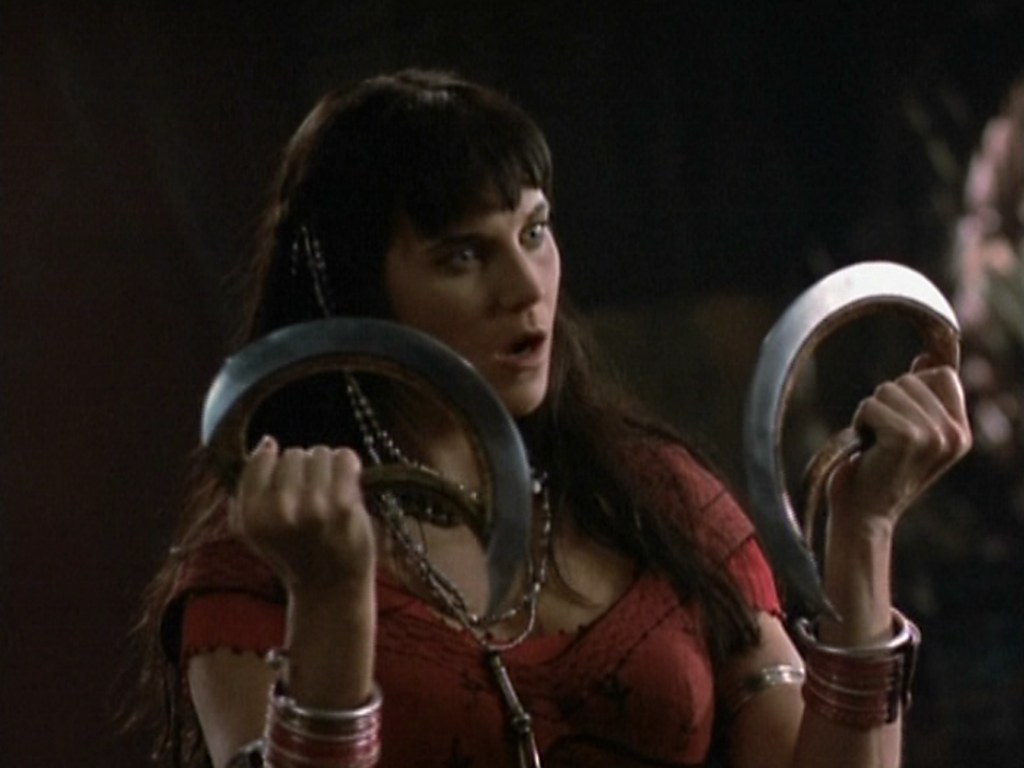 This weapon can also be used for close combat as well, assuming you’re wearing a gauntlet or if the Chakram has a handle. (Yes I’m using a picture from Xena: this isn’t a common weapon in media, I don’t have many images to use.)

Also these guys know Gatka, Shastar Vidiya, and Kung Fu: because these guys need even more ways to kill.

I got nothing… I honestly do not know how to counter a Rajput in combat, I don’t see any obvious weaknesses for them.

The Rajput doesn’t dominate in any category, but is GREAT at everything. His armor and shield might not be as extreme as Knights, but they are still great, and Knight plate-armor wouldn’t work in India’s hot climate anyways. His agility isn’t as quick as a Shaolin or a Ninja: but Rajputs have superior weapons and defenses to compensate. A Hoplite is lacking in projectiles and the Rajput could deflect or damage their pike with a Khanda or Mace. Rajput can defend themselves against bows thanks to their medium-sized Dhal shield, and many Rajputs were archers as well. Many Rajputs were horsemen also, and Rajput War Elephants were common.

I guess the only thing I can think of is that their beards could be easy to grab and pull, but good luck trying to get your hand that close to the guy who mastered literally over a dozen weapons.

But the Rajput is just so flexible; they have a weapon for almost every situation. It was only with the introduction of gun wielding empires (the Mughal and British) that were able to put an end to the ancient Rajput. However the Rajput people themselves are still alive today, and many are currently in India’s army as the elite Rajput Regiment.