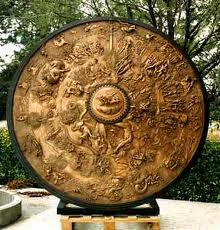 A shield is a type of body armor, meant to intercept attacks, either by stopping projectiles such as arrows or by glancing a blow to the side of the user. Shields vary greatly in size, ranging from large shields that protect the user's entire body to small shields that are mostly for use in hand-to-hand combat. Even after the invention of gunpowder and firearms, shields continued to be used. In the 19th century, some non-industrialized peoples continued to use shields (e.g. Zulu warriors and ). In modern times, police and certain military units still use shields most being clear polycarbonate, though some are constructed of light metals with a view hole.

Shields have been used all through histrory. Early shields were made of wood, hide or wicker. Later shield would use metals like bronze or later iron and steel. During the Middle Ages, shields varied in size. Some covered the whole body other were small and only ment to be used to delfect blows rather than absorb the impact. Some shields got absolutely bizarre, one such example is the German Dueling shield. A tall shield with spikes on it meant to be used to settle legal matters.

While the design and construction vary from culture to culture, shields will genraly fall into two types, Light and Heavy.

Light shields will be used almost exclusively for defence, being incaple of delivering blows to the opponent with a significent amount of force. The wicker shield's of the Zande and Persian Immortals are example's of these. While they offer less protection and can't be used offensively, they are much lighter and are easier to carry over long distances and still have some kind of protection. Insted of blocking an opponents weapon head on, some light shields were designed to deflect an opponents weapons by being turned slightly to take glancing blows. The Ishlangu and Native American shield's are example's of these.

The Heavy shield type are much sturdier in construction, and their weight allows them to deliver crushing strikes. Many shields like this have a boss in the center that lets them punch; however the Greek Hoplon doesn't have this feature, instead being strapped to the arm for greater leverage. While they offer greater defense and offense, they were heavy making them hard to use with out proper physical conditioning.

Any warrior using a shield had a major advantage over one who didn't. Th protection and offensive caabilities often far out weigh the trade off. The shield was often one of the most important tools in the warriors arsenal, as it allowed even poor warriors to go into battle with protection and face off against even highly trained armies with relative success. In many warrior cultures (most notably the Spartans), losing one's shield is seen as a disgrace.

While a shield offers many advantages it has to major drawbacks. One you can't use a two handed weapon, due to the fact that one hand was occupied with his shield. The other was with larger shields, you couldn't use a bow. This put them at a major range disadvantage, though the shield would generally protect against ranged weapons.

While many of the warriors on the show used a shiled of some type most are not given real testing. While the Viking and Spartan shield were tested as were William Wallace and Shaka Zulu, many more warriors may have there shield glimpse in test, but never properly tested. Some such warriors include the Celt, Persian Immortal, Roman Centurion, Rajput Warrior, Knight to name a few