An armor type found almost exclusively in Europe, it consisted of solid pieces of metal.

Early types of this armor were made out of Bronze; Spartans used bronze curaiss which proved to be highly effective against any type of attack. The major advantage of solid plate armor is that it can stop any type of weapon prior to the development of blackpowder fire arms. Slashing, stabbing and most bludgeoning attacks can be stopped by a good piece of plate armor. While mail and lamellar can stop two of the three types of offense mentioned, plate can stop all three.

While plate can stop most attacks, something like a warhammer with a spike may be able to punch through it, however if it goes through plate it will also go through chainmail or lamellar. Rapiers were designed to avoid the armor entirely and instead aim for the joints and exposed parts of the armor.

Although plate armor does increase weight and restrict movement slightly, it actually does not weigh any more than mail or earlier forms of plate and actually restricts movement less. [1] [2]

Voiders was a variation of gambeson padding with chainmain in the armpits. Contrary to popular believe; Knights didn't wear full chainmail under their full plate armor, instead the chainmail would only exist in the specific gaps of the armor like the armpits. Regular gambeson was also commonly use underneath plate armor. [3]

The Hounskull was a Bascinet visor used by the Knight in the episode which had a beak shape. This beak was designed to deflect thrusting attacks, primarily from enemy lances. Most visors during the late Medieval Age could also be lifted with ease, to allow a Knight the option to better view the battlefield without leaving the rest of the head vulnerable. By comparison, the Greek Corinthian Helmet needed to be removed entirely to allow the warrior to better see.

Plate Armor was incredibly expensive and so was uncommon among the common soldiers.

The heavy steel armor also trapped and conducted heat; which meant that armored Knights could easily overheat in arid or desert biomes. Because of this: Islamic armies focused on light cavalry and maintained use of sabers; which were not designed for fighting plate armor but were very effective against lightly armored opponents. This also meant that the contrasting climates of Europe and the Middle East made it difficult for Crusaders or Muslims to extend deeply into each other's territories.

Even within Europe, the threat of fatigue and overheating still existed for armored Knights. In The Battle on the Marchfeld (1278 AD): Rudolf I used a combination of horse archers and an ambush from the nearby woods to defeat and kill Ottokar II of Bohemia. The Knights of Ottokar were exhausted by the initial bombardment of arrows, not from the injuries but from the persistent harassment. Ottokar's Knights might have won this battle if Rudolf didn't ambush Ottokar with fresh troops.

When muskets and blunderbusses were introduced, the age of Plate Armor quickly declined. Such high caliber black-powder weapons could pierce basic plate armor with ease. Heavy bulletproof plate did exist, but was too expensive to mass produce and would be too heavy for combat. Musketeers did continue to use the Cuirass chestplate; however this armor could only deflect light caliber black-powder weapons. By the 1700s; almost all plate armor was considered irrelevant for combat, although some nobles continued to wear them for fashion. Bayonets and swords still made close combat relevant, and some armies (like the Swedish Empire) specialized in engaging in close combat despite needing to charge into enemy musket fire. However these charges were difficult to pull off effectively, as many musketeers would quickly lose morale if the charge was seen as too dangerous.

There were attempts to revive plate armor. WWI saw many prototype steel plated armor; but only the German 'Lobster Armor' could resist rifle fire and even then it was too expensive to be mass produced. Since snipers and artillery were so common; such armor could only be effective in specific circumstances.

Steel armor has been replaced by Kevlar primarily.

It was the armor of the Knight, and Joan of Arc. 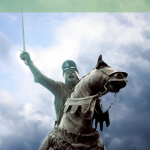