The Mauser C96 was German a semi/fully-automatic pistol, masterly machined to deliver rapid-fire destruction. It was the Close-Range weapon of the Waffen SS.

In the show[edit | edit source] 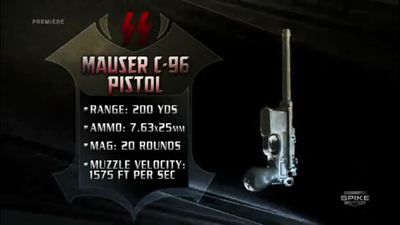 Retrieved from "https://deadliestwarrior.fandom.com/wiki/Mauser_C96?oldid=46528"
Community content is available under CC-BY-SA unless otherwise noted.