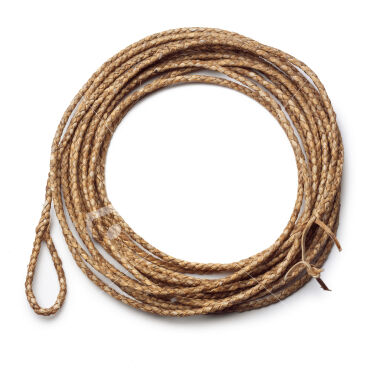 The lasso is a stiff rope or cord with a sliding noose on one end, typically used in capturing livestock. 20 feet of strangulation, it was the Mid-Range weapon of Attila the Hun.

The lasso is made from stiff rope so that the noose stays open when thrown and so that it is easier to open the noose while on horseback.

Rope was invented Circa 26,000 BC. Although the use of the lasso itself is difficult to confirm, the lasso was most likely used to assist hunting, domestication of animals, and slavery.

As a weapon, the lasso is thrown with the intent of the noose catching around the opponent's neck. If the user is on horseback, sufficient force can cause a hangman's fracture and crush the trachea, although it is more likely that the victim will be strangled or trampled by other horses while being dragged behind the user's horse.

Lassos were used throughout ancient warfare by steppe nomads and their decedents. The 1205 Battle of Adrianople is a noticeable example of Bulgarian horsemen using the lasso, although it was one of many weapons they used against the Crusaders.