Every episode has at least 4 experts in each episode, at least 2 per warrior. Most ancient experts are stunt men who have recently appeared in famous Hollywood movies. Some of the modern warrior experts are professional gunmen, former special ops, relatives of the modern warriors, or the actual warrior that they represent on the show (i.e. Spetsnaz soldiers as Spetsnaz experts or SWAT officers as SWAT experts). 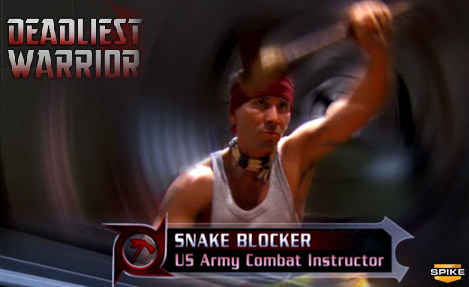 "The bottom line is if you're my enemy, I'm gonna kill you." 100% Jicharia apache and former US Navy Seabee

Snake Blocker is a US Army Combat Instructor and former US Navy Seabee and champion knife fighter. He tested weapons of the Apache. He tested the Tomahawk, the Knife, and the War Club. [1]

(Viking Weapons Instructor) "The samurai has no chance against a viking."

"Every move is going to be precise - everything, there's no fail. Failure's not an option for the samurai."

Barry Jacobsen appeared as a gladiator trainer in the Apache vs Gladiator episode.

"So, to truly understand the strength of the ninja, you had to see how they evolved. They didn't start out as warriors. They started out as farmers, villagers, peasants - the lowest of the low. Like most people, they sought independence, but at the time, Japan was ruled by feudal warlords and the military class the samurai - very tough, very well-trained fighters. In a fair fight, the farmers and villagers really didn't stand much of a chance, so when they had to fight, they just didn't fight fair." [6]

"You know, I'm dissapointed, but if ninja saw a Spartan in real life, he would just run away. He comes back at night and kills him while he sleeps."

We can kill them with respect as well.

Sala became famous for his work as a stunman for the Lord of the Rings original trilogy and for his depiction as Sauron in those films. "Well, that's what a computer says." "Computer must be Chinese... [1]

(On pitting William Wallace against Shaka Zulu) There really is no competition. It's basically like swatting an African fly.

(On pitting Shaka Zulu against William Wallace) "Shaka's goal would be to get Wallace's blood on his weapon."

"The IRA's never been beaten by anyone - and they never will be."

"Attila was a barbarian, but he had charisma. For Hungarians, Attila is a hero and a legend."

"(on the Zande winning and the Aztec losing) Sorry, Aztec warriors. Maybe next time. Nyum-nyum!" [26]

Terence Rotolo was shown to play one of Teddy Roosevelt's Rough Riders.

"Facing a Rajput, you never knew where he was coming from. He could attack you from all directions and he was always deadly. We will demolish the Romans."

"Of course we're going to win." "The Somali Pirates will fight you anywhere, on land, on sea, you name it. They'll fight you."

"My mother was the number one distributor of cocaine in the United States. She's the inventor of cocaine trafficking. I grew up around this constant violence on a daily basis that was considered civilized."

Ardeshir is a recurring actor on deadliest warrior; playing a mongol, a roman, Hernán Cortés and other background characters. [28] [29]

In season 3, Dave Baker is the main weapons maker on Deadliest Warrior. If there is an ancient weapon that is no longer existent today, Dave will remake them from their historical blueprint.

"Vlad does not stop, he does not quit, and ultimately, the psychology, the weaponry and ferocity of that man makes him the Deadliest Warrior."

"I like the Ming Warriors, but I think they should go back to where they came from and, you know, build walls. They're very good at that."

"By the time we are born, we hit the earth, we're warriors."

Timothy May, PhD (researcher and author of "The Mongol Art of War")[]

-Personally knew the dictator (The only expert to have actually meet a Named Warrior in person.)

Gary is the host of the modern Armory aftermath. He appeared in the Washington Napoleon episode, maning the cannons.

"Ivan the Terrible, he's brutal, he has the best weapons, he's mad.

"Cortez has better weapons, he is more sane. He's just going to win."

Steve Niles is known for writing various horror stories, including 30 Days of Night, which is a comic story about residents in an Alaskan town trying to survive a horde of vampires when the sun sets for thirty days.

Coincidentally, he is also the writer of Remains, a post-apocalyptic zombie comic story, where survivors try to survive a horde of zombies in a casino, after the detonation of a device meant to render nuclear weapons useless.

Writer of the Vampire Survival Guide.

Max Brooks is an American author and screenwriter specializing in zombies. His two most well-known works are The Zombie Survival Guide and World War Z, which is currently being made into a motion picture to be released in December 2012.

Matt Mogk is the author of the book Everything You Ever Wanted to Know About Zombies, and founder of the Zombie Research Society, which is dedicated towards the serious study of zombie science, survival, and pop culture. [34]