"From the time we are born, we hit the earth -- we're warriors."- Jay Redhawk, Comanche expert.

The Comanche, the born-in-the-saddle killers, who terrorized the 18th-Century American plains;

vs. the Mongol, the vicious Asian horse warriors who used brute savagery to conquer more territory in the 13th century then any empire in history

The Comanche and Shoshone people settled in the Great Plains around 1500 AD. They are widely believed to have been the first people of the Plains to use horses for transportation and war: due to interaction with European colonies and farm horses escaping into the American frontier. They mainly used spears and bows, the spears often tipped with obsidian. With their superior horsemen, they conquered much of the territory between the southern half of Kansas and the northern half of Texas in what was called Comancheria. This made the Comanches one of the largest and most powerful Native American tribes in North America. Their conquest was limited by other strong tribes such as the Apache.

Like the Lakota and the Apache; the Comanche managed to use the modern American made Repeating Rifles and Colt Revolvers to defend themselves against the USA: but were unable to resist the superior numbers of the US Army while also suffering from famines from mass bison hunting and pandemics like smallpox. The Comanche were conquered by the United States military in the late 1800s, especially in the 1860s and 1870s.

Note: Comanches also later learned how to use firearms, but these were not used in the episode as they would give the Comanche too much of an unfair advantage over the Mongol, because firearms obviously did not exist in Ancient Mongolia. Comanches prefer archery more than firearms.

In a valley, the Mongol is sharpening his Ild sword. Nearby, the Comanche cautiously makes his way to the top of the ridge overlooking the valley. The Mongol then notices a flock of birds circling overhead. Feeling as if he's being watched, the Mongol looks to the top of the ridge. Seeing nothing, he goes back to sharpening his Ild. Back up on the ridge, the Comanche readies his bow and arrow and fires downward to the unsuspecting Mongol. The arrow lands a foot away from the Mongol, startling him. He stands up and looks to the source of the arrow, but is unable to make it out due to the Comanche standing against the sun. Using this opportunity, the Comanche fires two more arrows at the blinded Mongolian, one which flies past him and another which lands right in front of him. The Comanche raises his bow and gives off a loud war cry and falls back.

Gathering his senses, the Mongol sheaths his Ild and mounts his horse, while the Comanche thrusts his War Lance into the ground and slings his War Hawk on his back. The Mongol reaches the top of the hill, but is confused when he only finds the Comanche's horse. Hanging off the side of the horse, the Comanche pulls himself up to reveal himself, takes aim with his bow and arrow, and shoots the Mongol in the chest. The Mongol is saved by his lamellar breastplate however, as he angrily thrusts his glaive into the ground and pulls out the arrow. The Comanche rides ahead to to set up another attack while the Mongol pulls out his bow and arrow. The Comanche rides past as the Mongol fires another shot, which barely misses him.

The Comanche triumphed over the Mongol because he was deadlier at long range and mid range since he could shoot faster and more accurately with his bow and arrow and his war lance could be used on foot and on horseback unlike the Mongol's glaive. As well as this, the Mongol was more used to fighting as part of an army, while the Comanche was equally capable of fighting alone or with other Comanches. 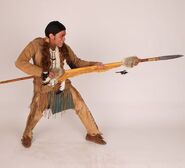 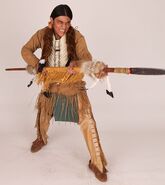 Add a photo to this gallery
Retrieved from "https://deadliestwarrior.fandom.com/wiki/Comanche?oldid=47191"
Community content is available under CC-BY-SA unless otherwise noted.