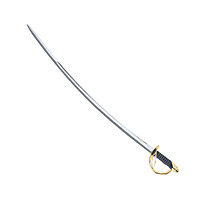 The Cavalry sabre is a curved, slashing sword. It was the Close-Range weapon of Napoleon Bonaparte.

Retrieved from "https://deadliestwarrior.fandom.com/wiki/Cavalry_Sabre?oldid=46723"
Community content is available under CC-BY-SA unless otherwise noted.