The Bow and Arrow was the deadly long-range weapon of the Native American warriors. It was the Long-Range weapon of both the Apache and Comanche.

The bows of the Apache and Comanche were simple bows four feet in length, made from a single piece of wood with animal sinew for bowstrings. The Comanche bow had a tuft of horsehair on the top arm to help the user gauge the wind. The arrows were three feet in length and tipped with stone (sometimes obsidian or flint) or metal (sometimes rusted metal) arrowheads. Arrowheads used in warfare were generally jagged or barbed so as to cause more damage.﻿

The Apache warriors would use their bow/arrow combos to pepper their foes with arrows before the enemy could react. The Apache probably called out their famous war cry to terrorize the enemy, and then they would quickly release all of the arrows as fast as they could, to stop as many enemies as they could, before the fight got up close and personal. The Comanche would use their bow & arrows on horseback and were capable of pelting a man with a maximum of 20 arrows in the time it took to reload the guns of that time. Native Americans also used poised arrows and flaming arrows.

The earliest known bows are dated as far back as 9,200 BC: although it is possible that bows existed thousands of years before this time. Bows were the dominate projectile weapon and managed to coexist with the technologically more advanced crossbows. It wasn't until the introduction of the musket did bows eventually died out. Despite their legacy, bows were not perfect; archers required years of experience to be effective, humidity could weaken the tensions within the bow and string, and intense weather could make arrows ineffective.

Test in the Show[edit | edit source]

The Apache's bow and arrow was tested on a gel torso, which was penetrated by multiple arrows, deemed multiple kill shots. Therefore, the bow and arrow was given the edge over the Gladiator's Sling due to its superior range, accuracy, and lethality. The sim reflected this opinion, with the Bow and Arrow getting a total of 188 kills. The Comanche's bow & arrows was tested against the Mongol's bow & arrow where it landed more hits (not more kills due multiple arrows hitting the same target). The Comanche's bow & arrow was given the edge due to better accuracy and faster rate of fire on horseback. 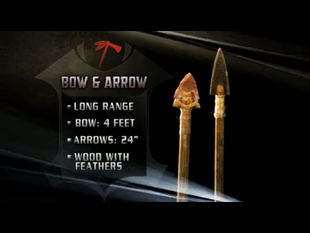 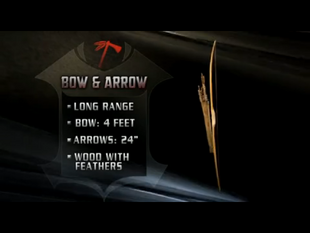 Bow & Arrow (Apache)
Add a photo to this gallery
Retrieved from "https://deadliestwarrior.fandom.com/wiki/Bow_%26_Arrow?oldid=46725"
Community content is available under CC-BY-SA unless otherwise noted.