The Schrapnellmine, or Bouncing Betty, is a bounding personnel mine, a jumping jolt of shredding steel. It was the Explosive Weapon of the Waffen SS.

The "Bouncing Betty" was so named because when tripped, the mine jumped out of the ground to about waist height, where it detonated, sending shrapnel in every direction. There were several methods of triggering it, the one shown being through the use of a tripwire. Over 1 million of these mines were produced during World War II and served as a key component of the defensive strategy of the Third Reich.﻿

One infamous example of boobytrap use by the Nazis was the 'crocked picture bomb': a tripwire that would be triggered by someone who would be adjusting a crooked picture.

After Allied occupation of Germany and Europe's affiliation of the Ottawa Treaty, many of the Bouncing Betty Mines that were discovered were dismantled and destroyed. 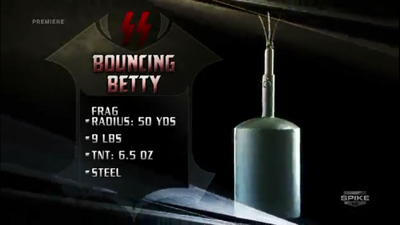 Retrieved from "https://deadliestwarrior.fandom.com/wiki/Bouncing_Betty?oldid=43186"
Community content is available under CC-BY-SA unless otherwise noted.