The Atlatl is a spear-thrower which increases the range of the Tlacochtli, the Aztec throwing spear. This weapons system was the Long-Range weapon of the Aztec Jaguar.

The Tlacochtli is a long, flexible dart with an obsidian head, resembling an enlarged arrow. It had fletching at the back to increase the stability in flight. The Atlatl was a hollowed out shaft with a spur or cup at the back end which butts against the end of the Tlacochtli.

Some of the earliest atlatls date back to roughly 400,000 years ago, used by the extinct Homo Heidelbergensis. The atlatl was the earliest weapons system developed by Homo Sapiens as well, having been used since c. 15,500 BC. It has been used virtually worldwide until more advanced weapons systems, such as the bow and arrow, came to prominence. In places like Europe the development of the javelin thong, used to increase leverage, caused the Atlatl to dissapear completely. In more isolated communities, like the Indigenous peoples of the Americas, the use of the Atlatl continued uninterrupted. It is more difficult to use and master than the bow and other ranged weapons, requiring much skill and practice, but in trained hands delivering a far more devastating blow with its larger projectiles than a traditional bow and arrow, from a shorter, but still considerable distance, as demonstrated in the show.

The atlatl works by increasing the leverage generated by the throwers arm. The one used in Deadliest Warrior had a mechanical advantage of six; for every foot you could throw the spear by hand, you can throw it six feet with an atlatl. Atlatls also increase the speed and accuracy of the spear.

Make your own Atlatl[] 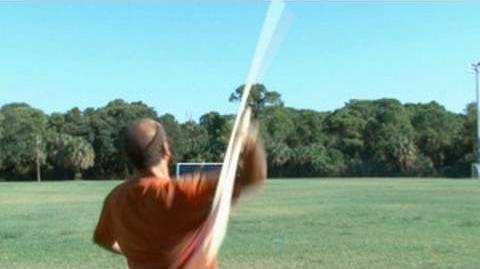